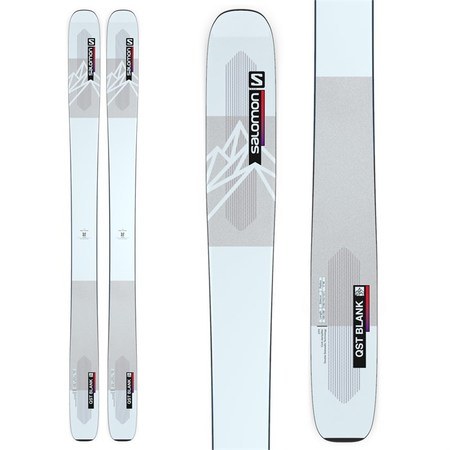 This Salomon QST Blank ski review will look at the QST Blank as freeride skis.

As per all out reviews on SKI Profiles, the QST Blank will receive an overall rating out of 100 as well as a breakdown of that score indicating the ski’s relative ability in different aspects of skiing and overall as a freeride ski.

Who Does the QST Blank Suit Best?

The QST Blank is a ski best suited to anyone who's looking for a true freeride ski capable of being taken down steep vertical terrain and deep powder conditions. While it does excel at these two things the most, it's still a capable ski on groomed runs, as well as jumps.

Well equipped for "powder hunting", the QST Blank can confidently be taken out in any amount of snow and trusted to stay afloat and perform.

Carving isn't their strongest suit but they can when desired. Would recommend doing so when the groomers are softer is all. Freestyle-wise they perform quite well for such a large ski. They have a solid amount of pop and feel comfortable on approaches and landings.

The QST Blank is certainly not for anyone who's a beginner or intermediate skier as they take quite a bit of effort to ski. But for someone who's looking to make the jump from advanced to expert, this ski is a great option as it isn't as large as some others out there.

Specs at a Glance 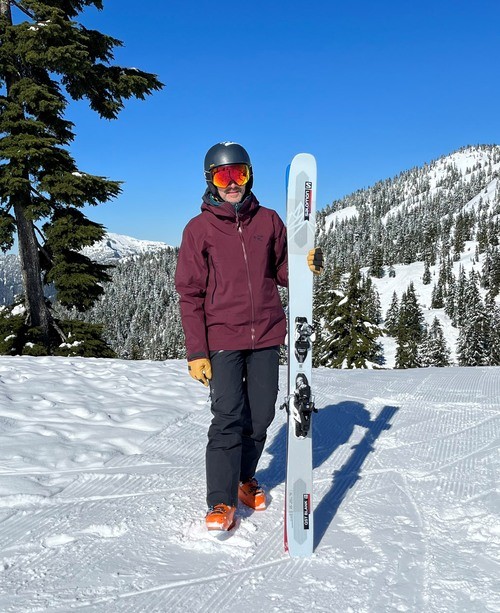 The Salomon QST Blank felt semi-loose on hard packed groomers but felt more stable on softer groomed runs/soft snow especially with some speed, as this is when they felt the most versatile and stable edge-to-edge.

Tip: Pretty consistent flex from tip to tail, with the nose feeling just a tad softer 6.5/10

Conditions played a large role in how well the QST Blank held an edge. When it was soft packed/groomed, they held a edge quite well. But when ridden in icy/hard packed conditions, it was much harder to keep solid edge hold and when at speed, could feel pretty washy.

When tested in hand before riding, they felt fairly heavy but once on the snow they felt like more of a normal weight, for a ski of its size.

While they were capable of both for the right skier, but they certainly lean more towards the aggressive side.

Unfortunately had no fresh powder to test in but after getting a solid feel for them and taking a look at the specs, we can strongly say they would perform very well in powder. The tip and tail rocker coupled with the 11mm of taper allow the tails to sink and nose to rise above powder effortlessly, while the large 112mm waist width provides you with a lot of surface area to float on.

The sheer size of the QST Blank makes carving require quite a bit of effort. They feel best carving when you get a bit of speed behind them.

As expected, they aren't the most nimble due to their size. The tails will require you to put in a good amount of effort to release them for turning/slashing.

Not the most stable/comfortable at higher speeds in harder conditions but capable of going pretty fast if desired. The nose can get pretty chattery when you do push them, found it best to only do so when the snow was soft packed or well groomed.

Overall felt capable on most jumps.

Pop(ease of access): The size demands a bit effort when accessing the pop but still not overly difficult.

Pop(total pop): Decent amount, considering their size. Definitely need to load it up but it gives back nicely.

Approach: Overall felt in control and stable. Not the quickest for sudden adjustments but otherwise performed well.

Landings: Large surface area combined with a stiffer flex made landings effortless and comfortable, even when landing tail heavy.

Side Hits: Enjoyable - not ideal for all sizes but can handle most with a bit of effort.

Better for small jumps or bigger jumps or both: Both as it felt pretty capable on most jumps.

This is where the width really shined. They smashed through any crud/chunder with next to no effort and I never felt like I was getting bucked around at all - always felt in control.

Certainly not the QST Blank's strongest attribute, as they are much to wide and heavy to be taken into moguls regularly. It requires a ton of effort to whip them around.

Much like moguls, trees aren't the easiest as it will require a lot of effort, especially if they are dense. With that being said, they would perform a bit better if there was some fresh snow in-between them.

The partial twin shape allows you to spin around and ride switch quite easily and comfortably. They never felt too catchy either.

The Salomon QST Blank were designed with a certain riding style in mind and it excels at these things extremely well but it can still handle itself well on groomed runs and jumps too.

While it can get up to higher speeds and lay out semi decent carves, the QST Blank prefers to be ridden at moderate speeds on groomers (when not in powder). They smash through crud well, but when it's combination of hard and messy, it does feel quite a bit of chatter.

MORE INFO AND WHERE TO BUY ONLINE

If the QST Blank sounds like you're kind of ski and you want more info, want to check out sizing, availability or current prices or are ready to buy, check out the links below: 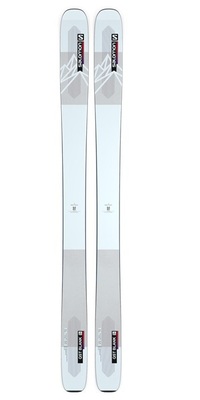