Ski Camber Explained: Which Profiles are Best for Which Styles? 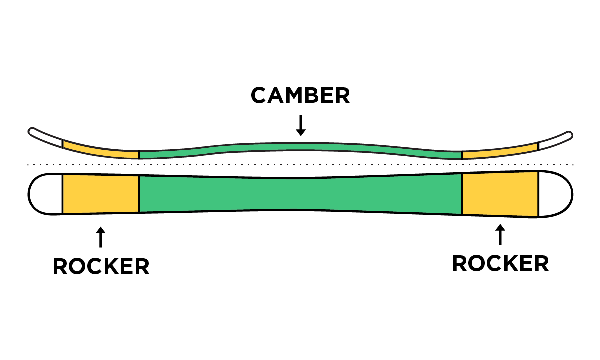 Firstly, let’s take a look at what camber actually is

Camber plays a huge role in the performance of any ski.

In simplest terms, camber describes the curvature of a ski. Camber is the built-in arc, or curve, of a ski when looking at it from the profile, or side, view. When unweighted, the arch is visible and obvious. With weight, the camber becomes neutralized and flat against the snow.

Without camber, the weight at the mid-section would cause the ski to have a large pressure point under foot, making it more difficult to make ski turns. With the camber, the added weight evenly distributes throughout the ski, thereby making maneuvering of the skis easier – and adds spring to turns and pop for jumps.

Overall, it helps for a skier to control their turns. Camber gives the best edge hold and it gives each turn more power. It provides a springiness or pop into the ski every time the ski rebounds to its natural arc shape during weightless turn transitions.

Why Does Camber Matter?

To understand the full extent for why camber is important, it is necessary to understand effective edges. Effective edges provide control while craving and making turns. The effective edge of a ski is measured by holding the skis base up against a flat surface and applying weight at the mid-sections. As the weight is applied, the tip and tail will start to rise giving an indication of where the skis’ pressure points are along the edges.

A full rocker ski (also known as a reverse camber ski, continuous rocker, or no camber ski) has significantly less effective edge, tip to tail, making it less than ideal for carving – and less ideal for skiing at speed.

A ski with a short effective edge (a reverse camber ski or a ski with lots of tip and tail rocker) is unstable at high speeds and will not allow the skier to maintain complete control in variable conditions (choppy, icy, groomed, etc.). However, it will ski strong in soft snow and powder and will be responsive in tight trees or down technical lines. Such a ski will suit an advanced skier well, who rides mainly those conditions. But it can also be good for a beginner, in the sense that it is easy to make turns on – though a ski with camber and rocker is usually recommended for a beginner skier.

A larger effective edge (full camber skis or camber skis with a little rocker at the tip or tail) will remain stable at high speeds. The edge holds well in icy conditions but will be harder to maneuver through more technical terrain.

Rocker, an upward curve that can be found on both the tip and the tail of the skis can start closer to the waist of ski – making it quite pronounced – or it can be more subtle – starting just before the tip or tail. The camber allows for more effective edge, while the rocker helps to keep the ski afloat in powder – using both is often a good pairing depending on your style of skiing. The question isn’t always rocker or camber but which blend of camber and rocker is best for you.

The traditional design where the mid-section of the ski rises and arcs, without any rocker. 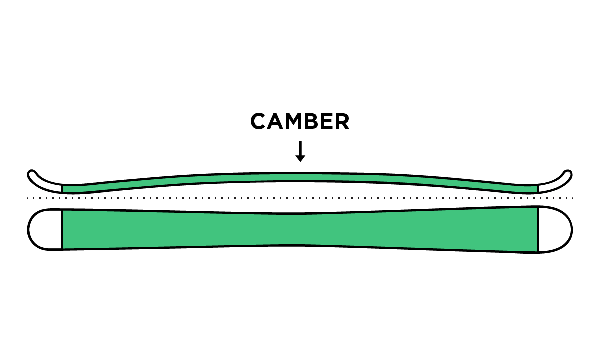 The tail and mid-section of the ski is camber, while the rocker tip rises upwards. Its purpose is to give the ski better flotation while maintaining control. 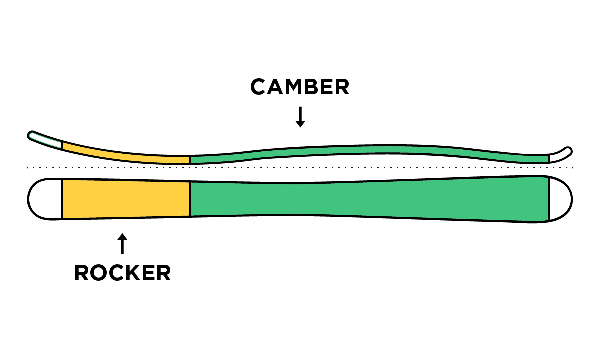 The tip and tail are rockered while the mid-section is cambered. Great for deep snow while continuing to provide edge control. Good for skiing frontwards and backwards.

This is the opposite of camber. The whole ski is tip and tail rocker, while the mid-section of the ski remains entirely in contact with the snow. It is intended for deep, soft snow and not so much for carving. 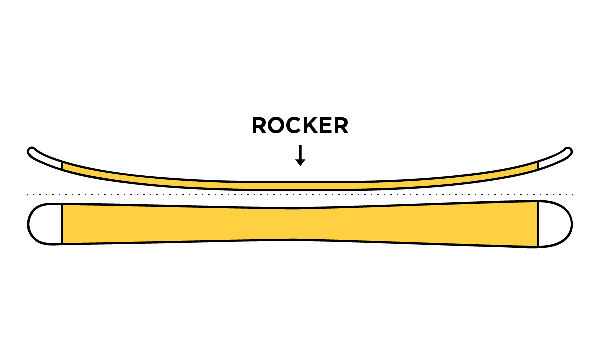 Like reverse camber, there is no camber involved in this profiles. But instead of being fully rockered, there is a flat section in the middle, and rocker tip and tail. 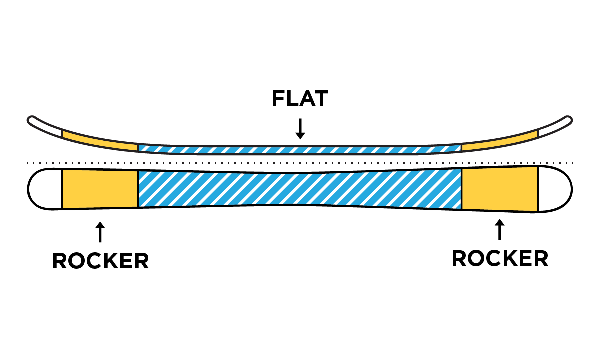 Camber Based on Terrain Preference

Different camber profiles can be better depending on the terrain you ski, or most predominantly ski. Camber profiles with both camber and rocker are the most versatile and allow you to have good performance on a variety of different terrains and different styles.

Camber is usually necessary for groomed slopes as it provides extra stability at higher speeds and reliable edge control. Mix of rocker and camber will still ski well on groomed slopes and are often more forgiving of errors and can provide a more casual ski.

A combination of camber and rocker performs very well if you’re heading off groomer. More specifically, a rocker tip, cambered or flat mid-section, and a flat or low rocker tail is great because it allows for the ability to turn easily and quickly and provide for float.

Full rocker was made for powder skiing, but a combination of rocker tips and tail and camber mid-section will ski very nicely too.

Having camber is usually preferable as it helps pop off jumps – but having some rocker is good too – the rocker making for better buttering (or transitioning from nose to tail) very smooth. Usually you would want even tip and tail rocker, so that it feels the same or similar to ski forwards and backwards.

Beginners: Reverse camber skis provide for easy steering and are usually what ski schools will rent to beginner students during ski lessons. Skis that have additional camber points near the tips and tails of the ski are not good for beginners. The camber on the tips and tail make it easier for the skier to catch an edge.

But camber in the middle and rockered tip and tail is also good for a beginner – it gives them easier maneuverability, especially at slow speeds, but also gives a bit more stability and gets them used to the feeling of camber. Ideally, there would be a reasonable amount of rocker.

Intermediate: For those skiers falling somewhere between beginner and advanced, a cambered center and a tip rocker, or tip and tail rocker is the best balance. It allows the ski to stay afloat in powder but can easily be controlled to plow through choppier snow while staying centered and balanced throughout every turn.

Advanced: Powder skiers (helicopter skiers, powder chasers, and most backcountry skiers) prefer more tip and tail rocker. It keeps the skis floating above the snow surface. Reverse camber also gives more flotation in deep, bottomless powder but when you’re not always in powder, it can be good to still have some camber in the mid-section.

For carving hard and bombing – and for ski racers, more camber is better because it gives them more control over their edges,  more precision on hard and icy terrain and better stability at speed.

The majority of skiing styles benefit from camber and, therefore, majority of skiers will look for skis with some amount of camber in them – whether they’re fully cambered or have tip and/or tail rocker. Camber provides precision for each turn and a snappy transition between turns. It allows for continued control of the ski and stability as the edges hold their grip.

Camber is great for high speeds on packed snow and on icy slopes. However, camber is less reliable in varied snow conditions that have looser and powdery snow.

It’s important to note that, along with camber and rocker, the ski’s length, width, side cut radius, stiffness, flex pattern and build materials play a large role in the performance of a ski. All these features combine to create a ski. So, while thinking about camber is important, it is also important to consider how the rest of the factors will also play a role in your perfect ski.

9 Tips for Becoming a Better Skier

Get the 9 tips plus other relevant skiing emails, review releases, promotions, and information from time to time

How to Ski Moguls

How to Ski Moguls