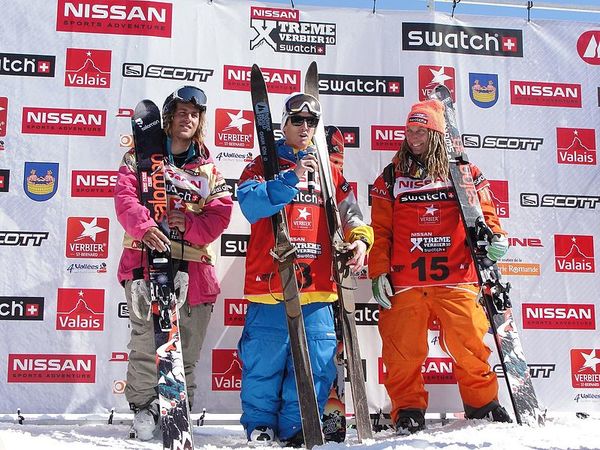 In the world of skiing, a few names stand tall above the masses, none perhaps as internationally recognized as Candide Thovex. The “Flying Frenchman” is a mainstay in the ski industry and has been since the late ‘90s. Let’s take a look at where you may have seen him, why he’s so well-known, and what to expect next from his jaw-dropping career as one of the best freeskiers in the world.

Candide Thovex was born in 1982 in the Alps region of France and started his ski career at 2.5 years old. Early exposure to skiing allowed Candide to fully embrace the lifestyle that many skiers only dream of. By age 4, he was building ski jumps in his backyard, and it only took him until 14 to win his first French National Junior Championship.

For context as to why Candide entered our collective winter conscience. It’s important to remember how the ski industry was in the 1990s. In short, it was in decline. A lot of its malaise can be attributed to the meteoric rise of snowboarding in the 1980s. Snowboarding was cool, had all the momentum, and with the establishment of well-known companies like Burton, was positioned to dominate skiing. The super injection of snowboarding made traditional skiing seem old and ineffective.

Candide grew up into this void (along with other stars like Shane McConkey, Tanner Hall, Sarah Burke, C.R. Johnson, Mark Abma, and more) and was given a unique opportunity to be at the forefront of what became a major revitalization of skiing. In 1999, at the age of 16, Candide jumped Chad’s gap, an event that generated significant buzz in North America.

Chad’s gap is a 126-foot gap in a ridge in the Wasatch Mountains of Utah; Candide sailed across on his first try. This same gap broke both of Tanner Hall’s ankles, illustrating how ridiculous it was that Candide nailed the jump on his first attempt. A year later, he came back and did it again, adding a 720 rotation and a tail grab to the mix. His propensity to shoot sky-high and land incredible jumps supercharged his ascension into the skiing elite.

In 2000, freeskiing was introduced at the Superpark event. That decision pooled all of the up-and-coming, big-air-loving world skiers together and acted as a growth hormone for professional freeskiing. Candide came and conquered, flying higher and farther than anyone thought possible. With cameras capturing his fluid and creative big air style, the general public began pushing for a skiing revival that came to symbolize the first decade of the new millennium.

While the skiing industry had finally found a new angle to increase participation (the freeskier), Candide continued racking up awards. In 2000, Candide won the Big Air competition in Mammoth, California, and his first X-games gold medals. In 2003 he won the superpipe event in Aspen; in 2004 he performed the first-ever 810-degree trick to rail, and in 2007, won his third X-games gold.

In 2007, Candide suffered an injury to his L1 vertebrae and was told not to expect to return to his previous big air form. Having spent the last decade committed to competitive skiing, this news was understandably devastating. So, while the resurgence of skiing continued producing freeskiing stars, Candide retreated back to the basics. skiing on his own time and trying to fall in love with the sport all over again. During this period, he released his first documentary, which detailed the injury and his subsequent recovery.

The injury forced him to reevaluate what he loved about skiing, and that led to an understanding that. Above all else, skiing needed to be fun. He began embracing filmmaking and turned his attention to big backcountry ski lines instead of a solely competitive focus. This shift was consequential, because like he and his fellow pioneers had done with big air, it allowed skiers to expand their idea of what was possible.

Candide’s point of view video series, “One of those days,” does an excellent job highlighting this new focus. The videos are short, well-edited, and don’t feature any music; in short, they are very relatable and so much fun to watch. Candide embraced the video-making format and continues to deliver beautiful and inspiring videos highlighting the best parts of skiing. A whole generation of skiers and riders grew up idolizing what Candide and his fellow pioneers were doing.

In 2015, he helped produce what is probably his most famous video series, a two-part Audi Quattro commercial featuring Candide skiing on multiple surfaces, none of which are snow. The videos are both outrageous and gorgeous, highlighting a bevy of beautiful natural locations and, again, expanding the idea of what is possible on a pair of skis. Click here to see the first video and here to see the second. And while, ultimately, they are still car commercials, Audi embraced the sound and feel of Candide’s “One of those days” series; there is barely any music. All you really hear is Candide’s skis meeting whatever surface they are currently skiing. It’s organic, authentic, crazy, and wildly creative.

So, why is Candide Thovex so well known? He helped revitalize the skiing industry. By showing that freeskiers could perform just as many tricks as snowboarders. He won international big air competitions early in life and frequently. When faced with a daunting injury, he reevaluated his relationship to the sport, helped open up the idea of backcountry skiing, and utilized video to show everyone with a screen how beautiful and creative the world of freeskiing could be. After watching his videos, you get the sense that there aren’t many surfaces on this earth that Candide Thovex can’t ski. What better ambassador for the sport than the guy that skis it all?

Candide is entering his fourth decade of life, and with people skiing well into their 70’s, if he keeps his health up, we should be seeing a lot more of him over the next decades. Since the Audi commercials, Candide has released more videos highlighting the joys of skiing. His legacy is rooted in his competitive big air achievements, mind-blowing video series, and the overarching sense of fun that they effortlessly instill in the viewer.

There have been many quotes attributed to Candide Thovex over the years. But none perhaps more fitting than what Powder magazine editor John Clary Davies said after Candide released his first “One of those days” videos. “This is the most fun I’ve ever had skiing and all I did was sit in my office and press play.”

Quiksilver. (2013, May 14). Candide Thovex-One of those days. YouTube. Retrieved from    https://www.youtube.com/watch?v=ygxufRprWpY&t=2s

9 Tips for Becoming a Better Skier

Get the 9 tips plus other relevant skiing emails, review releases, promotions, and information from time to time